In my next 50 State Study series, it truly surprised me to learn about a secret southern dish comforting many people in this next American state.

—-> click here for the secret recipe 🙂 —> Chocolate gravy on biscuits!

Yes, I took the time to assemble the easy recipe and the gravy came out paler and thinner than expected but it was scrumptious anyway!!

My poor attempt at food blogging:

So here we are, in Arkansas, the American state meaning south wind from the Quapaw Indians.

If you shop at any Walmart super chain stores, as I do, you probably know of the famous Mr. Sam Walton, who opened his first Walmart store in Rogers, Arkansas back in July 1962.

Today, there are over 11,000 stores with around 2.2 million associates worldwide, and this big business, averaged nearly $473 billion in 2014.

Okay, so some folks might want to skip the shopping business . . .

How about precious gem mining?

A visit to the Crater of Diamonds State Park, the only diamond mine in the world open to the public and allows visitors to keep their own treasures, such as diamonds, amethyst, garnet, jasper, agate and quartz.

Really, though, the idea of digging dirt around, with the sun bringing on the sweat . . . and wondering exactly how many people come up empty-handed, makes me think: Is this worth it?

Well, at least the fee to dig is economically priced at $8 for adults, $6 children 6-12, and under 6, free, and you can spend all day hunting for valuable jewels.

This really looks like hard work…is it worth it???? Source: Wikimedia Commons, Doug Wertman

Time to wash the dirt away and relax at the Hot Springs National Park.

Rumor has it that this hot springs, flowing at an average temperature of 143 degrees, is the most visited and oldest Arkansas park.

Chuck wants to take know if he can take a dip. Please, park ranger??

“Please, oh, pretty please, can I go for a hot spring dip? I promise not to splash!!” ©

Now, before we leave Arkansas, did you know:

The Spinach capital of the world is in Alma, Arkansas?

Remember, eat all your spinach so you can be strong like Popeye, as all good mothers tell their children. 😆

And, please, put a muzzle on your dog in Fayetteville, Arkansas, because it is illegal for dogs to bark after 6 p.m.

(Shhh!!! don’t let my dog Chuck know or he will bark extra loud after 6 p.m. and bark for hours, the punk.)

Also, in this same town, Fayetteville, it is unlawful to walk your cow down Main Street after 1 p. m. on Sunday.

So don’t even think it.

And, no matter how much your pet alligator pleads for a stay in your bathtub, just be firm and say NO!

It is illegal – totally – to have an alligator in your bathtub. Period.

Other Arkansas trivia worth knowing for no reason . . .

– The first American named national river is the Buffalo National River and, believe it or not, is still one of the few free-flowing unpolluted rivers in United States. 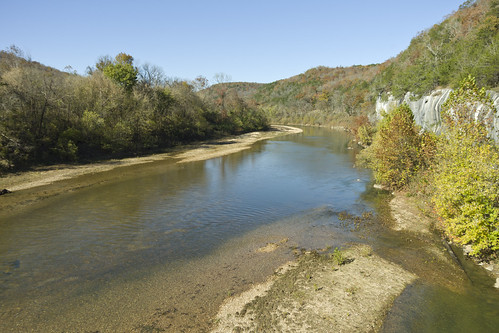 – The self-proclaimed watermelon capital of the world and birthplace of Bill Clinton, 42nd U.S. President is Hope, Arkansas.

– Lawmakers back in 1985, made good ol’ milk the official state beverage and picked the fiddle as the state instrument.

Finally, a few famous entertainers born in Arkansas: Johnny Cash and Glen Campbell, who unfortunately, is battling the late stages of Alzheimer’s disease since June of 2014, and resides in a long-term care facility.

Prayers and blessings to this legendary country singer:

Until next time, cheers! 🙂

☼Hot Off the Charm Press: